As I mentioned in my Lapland summery post, my photography spark was ignited and I wasn’t going to let it die off as I did after my big world travels 2.5 years ago so I signed up for a photography workshop in the Dead sea in order to shoot some night and sunrise photos.

I never really took night shots before and I was a little worried about how my little Sony NEX-7 would handle things and I was mainly concerned with the focus but after seeing the images it seems like I was worried for nothing.

The night shoot was done at the bottom of Masada mountain where you can find some very interesting Marlstones that can make as a great center piece for night or day photography. The light pollution is pretty small in that area and it was also a dark night with no moon and it is pretty amazing how many stars you can see in the sky when you are at a pretty dark place.

Since i’m living in the biggest city in Israel I can barley see 10 starts at night so looking up and seeing literally thousands of starts was an great sight and actually being able to take some photos that in my opinion turned out pretty good was even better but i’ll let you be the judge: 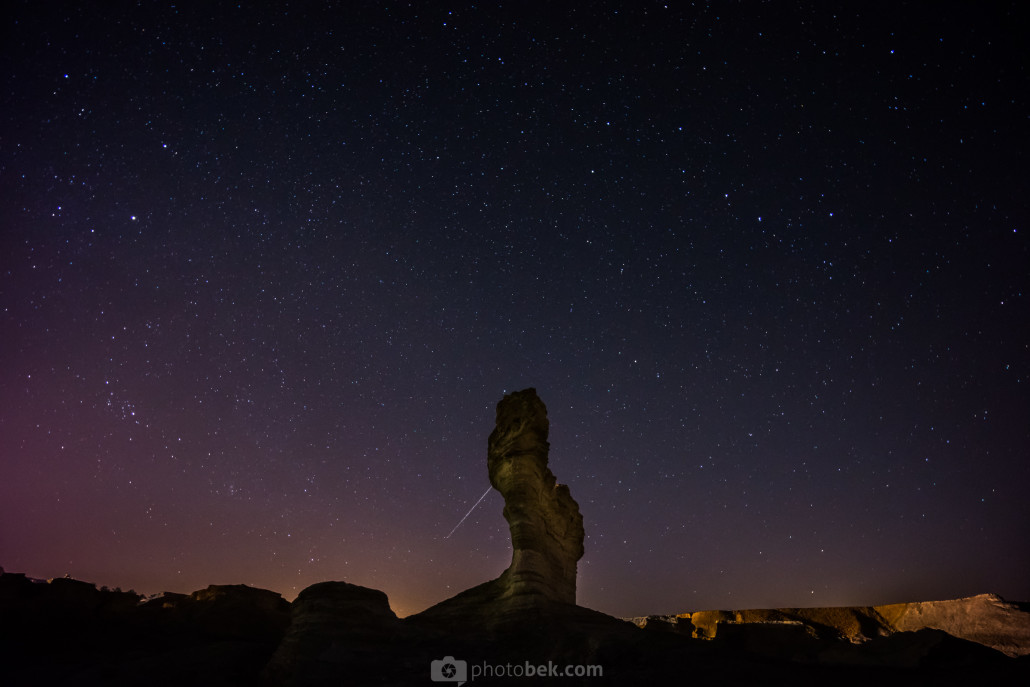 Overall I’m more than happy with the images I managed to get as this was my first night shoot and it can only get better from here. I will be heading down south again in May to Timna Valley which should be much darker than where I was in the dead sea so I hope to be able to shoot the Milky Way for the first time.

After a short 2 hour sleep we got up and headed down to the beach to get ready for sunrise. We were pretty lucky as we had some clouds which can always make an image better than just clean blue skies.

The main thing was to find a good composition with an interesting foreground and get ready before the sun pops up over the mountains on the other side of the Dead sea. Again, pretty lucky as I found a great foreground within a minute (give or take) and now I had 30 minutes to wait for the sun to rise.

I used my 3 stop ND filter to get some motion in the water and I set my f-stop to f22 because I wanted to get the star effect from the sun just as it is picking over the mountains. 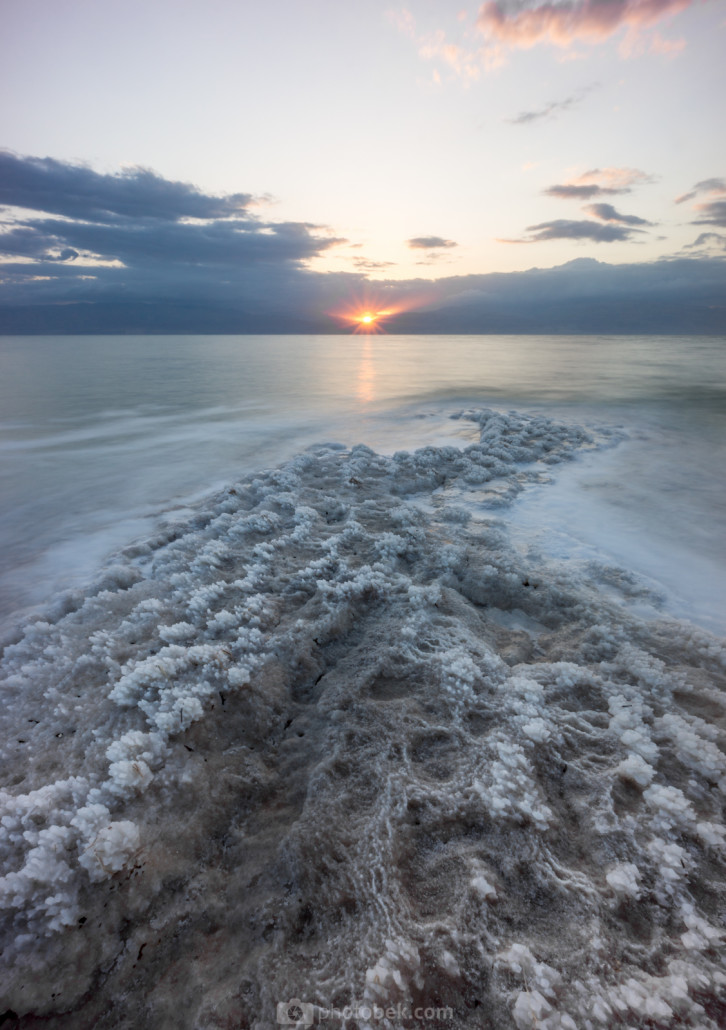 Since the sun was already up and we had an hour or so to spare it was time to turn around and see if there is anything interesting to shoot. I knew there is a very big sink hole in the area so I decided to go and check it out.

As I got closer I noticed it was filled with water and had the reflections of the mountains and clouds. It was pretty amazing and scary at the same time as that entire area is filled with sink holes and new ones can be added at any given time with no warning.

Also, getting too close to the edge of the sink hole wasn’t a very smart move to make (even for me) so I had to figure out how to get the best shot. 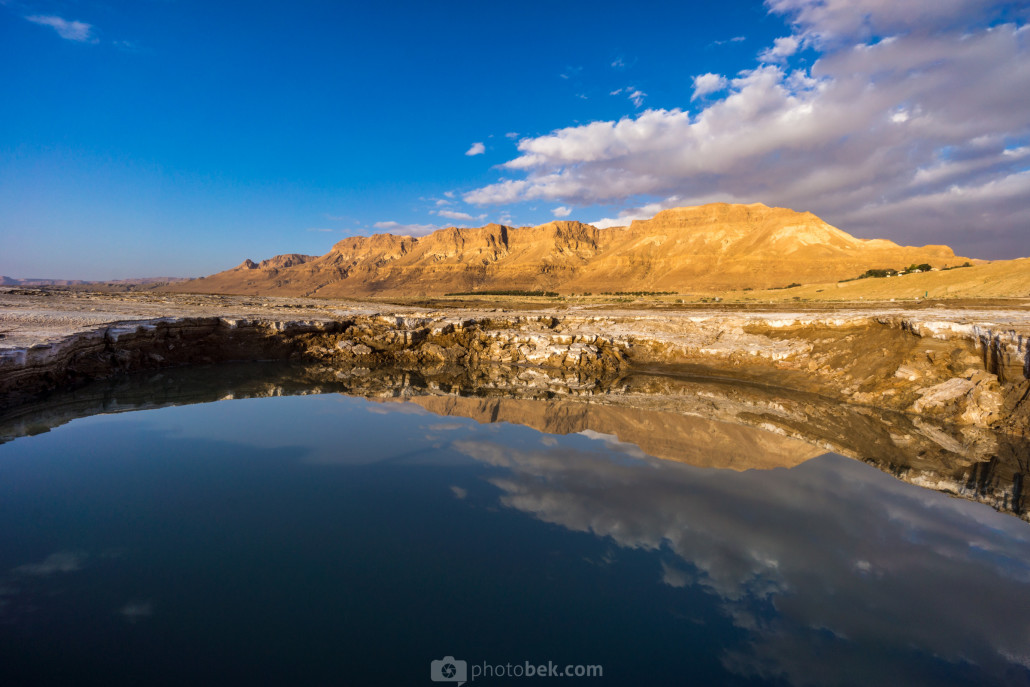 This wasn’t it but it’s the best shot I got with the reflections. Shortly after that the wind picked up and the water started creating little waves and ripples and the reflections were gone.

It kind of sucked but than I remembered I had my 10 stop ND filter that I never really used before since I wasn’t able to use bulb mode and shoot exposures longer than 30 seconds. This problem was fixed thanks to the Maxstone Kickstarter project.

My initial plan was to use the long exposure in order to get the reflections back but I learned that if you don’t see reflections with your eyes than it won’t matter how long of exposure you will use, you won’t see them in the image as well.

Here is the winning shot with an 89 seconds exposure: 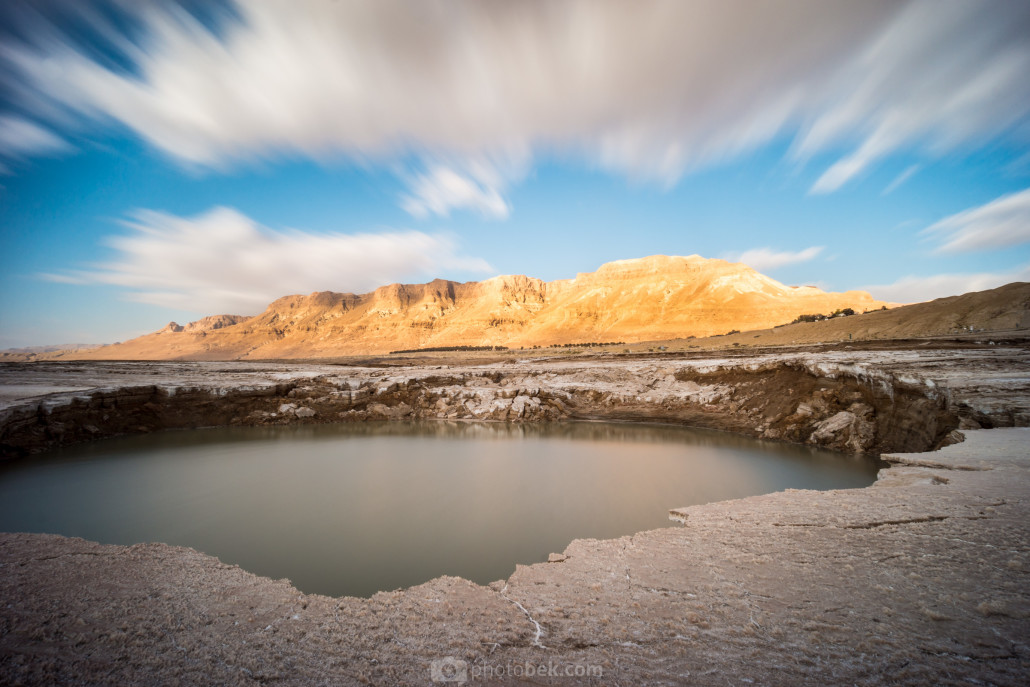 The long exposure has a great effect on moving clouds as you can see above and it also got rid of all the waves and ripples in the sink hole and added a silky like texture to the water.

The only drawback to this image and the one thing that could have made it EPIC is if I could get the entire sink hole in the frame and use it as the subject in the foreground. Even with my 10mm lens I couldn’t get it all in (which can tell you something about the size of it) and I wasn’t considering shooting a panorama at the time.

At least I have a good reason to go back 🙂

I was pretty impressed with my 10 stop ND filter so I figured i’ll keep using it as it makes the images much more interesting so I found another great spot composition wise and 45 seconds later I got this: 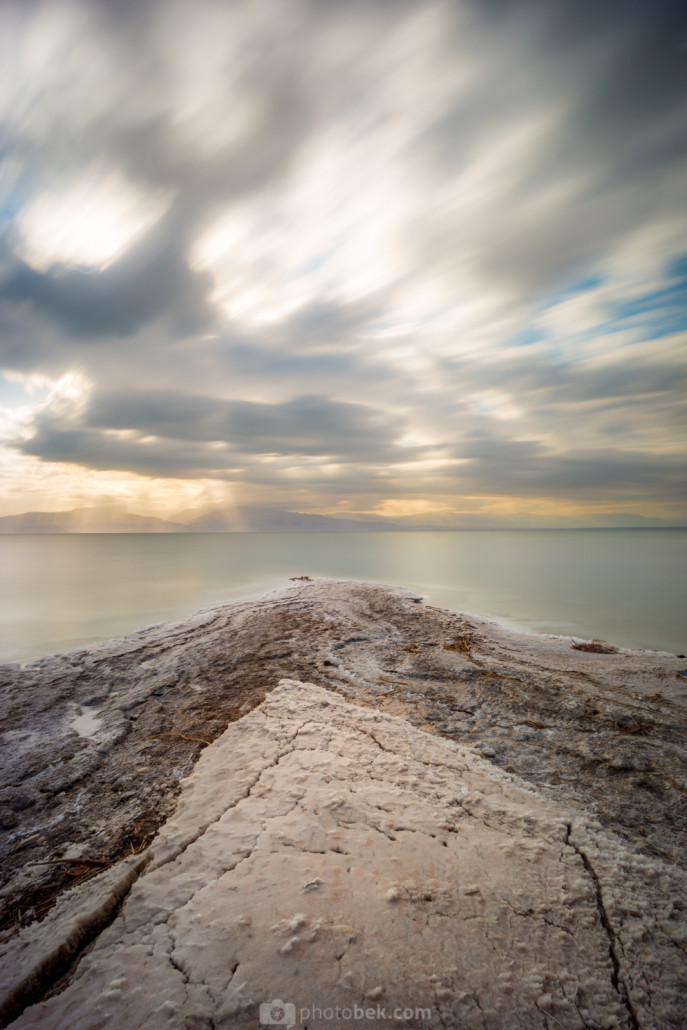 Again, the long exposure does wonders to clouds and water and it really makes the image much more interesting and pleasing to the eye.

At least I think so 😉

There is no doubt I will keep using this great filter as it makes it possible to get great shots at times other than sunrise and sunset.

Feel free to share your thoughts about the photos by commenting below.

Want to join the discussion?
Feel free to contribute!

Experimenting With a 10 Stop ND Filter, Part 1
Scroll to top
×